… that the emu is native to Australia and was imported into the United States during 1930 through the late 1950’s as exotic zoo stock. Today, the exportation of live birds and eggs is prohibited from Australia. Exports of processed emu products from Australia, however, are on the rise as emu begins to gain acceptance worldwide for its unique qualities.

… that emus are raised throughout the United States and have adapted to challenging conditions ranging from the frigid winters of North Dakota to the harsh heat of southern Texas. Emus grow to be five to six feet tall and may weigh up to 140 pounds when mature.

… that emus normally breed as pairs. The hen can be productive for as long as 20 years, laying between 20 to 50 eggs in a season. Laying normally begins at two to three years of age, with the season extending from October to April in the United States each year.

… that the emu egg varies in size and color. It is usually dark green, averaging 5 inches long and weighing approximately 600 grams. Artificial incubation is often conducted at a temperature of approximately 97.5 degrees Fahrenheit and a relative humidity that varies according to the climate. Average incubation time ranges from 50 to 60 days.

… that emu breeding is one of the fastest growing agri-businesses in the United States. Emus are almost totally useable, yielding the following products: 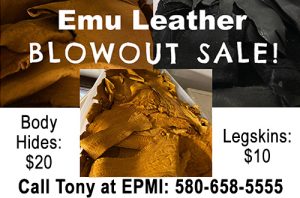